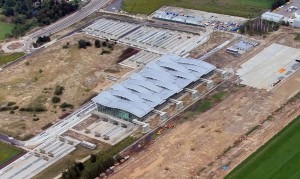 POIS.06.03.00-00-001/09-00 for the Project „Wrocław Airport – extension and modernization of airside and landside infrastructure” within the frameworks of the task 6.3 Development of air network TEN-T, priority VI Road and air network TEN-T, Operational Programme Infrastructure. The financing is defined in advance and amounts to 128 110 000,00 zł.

The object of the project is  the construction of a new passengers terminal with airside and landside infrastructure which provides the increase of the capacity up to 3,3 mln  passengers per year, of the airport located in TEN-T network and the capacity of Polish airspace as well as providing the high quality of services.

The Project includes the following investments:

“Comprehensive study and technical documentation of development of an International Airport Wroclaw” – 2008-PL-92004-S – in the field of the trans-European transport networks (TEN-T).

The project  which has been prepared by Wrocław Airport is a response to the urgent need for the diagnosis of its situation and for defining the directions of its development . At the moment, air transport is one of the most dynamically developing  industries and some forecasts indicate that by 2020 there will be an increase in the number of passengers by three and a half times and in the number of air operations – by nearly two and a half times. The Project in question involves drawing up a number of documents and analyses necessary for the execution of the investment project.

2.1 Laying out the master layer map

At the moment, the airport does not have a master map suitable for design purposes. Such a map is an essential element of all investment actions.  Within the Project framework, we are planning to draw up such a layer map possibly including all the information necessary for potential contractors.

GIS is A spatial map includes geospatial information.  This  3-D map containing a vector representation of the object current state, and of the network of objects,  with animation at the real time of particular elements on the schemes. Designing a map in this system (in an appropriate scale) allows to present different aspects of project execution, environment protection, and so on. We wont us this map to the noise monitoring system.

2.3 Drawing up the inventory of aprons

The scope of the project actions encompasses preparation of detailed engineering design documentation of construction of taxiways, rapid exit taxiways, aprons in front of the new terminal, the South deicing apron at the threshold 29 and an isolation bay near the threshold of runway 11. Completion of this action is indispensable for the airport to further operate. Without the said project works we soon will not be able to clear aircraft for landing nor handle them as the present infrastructure has now worn out and currently remains inefficient when faced with the increasing traffic.

2.4 Carrying out the analyses of passengers and operators

This task involves comprehensive elaboration of a strategy for air service development for Copernicus Airport in Wroclaw through carrying out a number of analyses and studies regarding passengers, network of connections, trasport to and from the airport, comparisons with other airports and so on.

2.5 Drawing up  technical documentation of the noise monitoring system construction

Aircraft exploitation induces noise emission around airports. The emission of noise occurs during flight operations and non-flight operations directly related to the airport functioning, and aircraft and helicopter handling. Therefore the Airport Management Board would like to take actions aimed at the construction of an acoustic screen at the apron and prepared documentation  to the noise monitoring system

Within the airport perimeter there are a number of trees. For safety and environmental reasons, it is necessary to classify them and draw up a detailed dendrological inventory. This will enable to identify those which constitute major flight obstacles.

2.7 Carrying out geological tests for the entire airport

The stage necessary for the project execution is carrying out geological tests. Until recently the Wroclaw airport shared the airfield with a military base. Therefore it did not and still does not have some  basic documents. Carrying out geological tests for the entire airport will enable to identify the soil structure and prepare in detail the projects of construction of aprons- where soil structure and load carrying capacity are basic parameters – and all other investment projects planned to be conducted within the airport perimeter.

The Project will be executed over the period from January 2009 to December 2011.
The Project has been divided into three major activities: Project management, implementing the project scope and external audit.

Task:  „Improvement of safety and guard at Wrocław Airport Co. POIS.08.04.00-00-001/09 within the frameworks of the task 8.4 Safety and guard of air transport priority  VIII Safety of the transport and domestic transport networks of Operational Programme Infrastructure and Environment 2007 – 2013.”

Total cost of the Project amounts to 17 330 184,64 zł and includes the eligible costs amounting to 14 214 713, 74. Subsidy amounts to 12 082 506,67 zł. Concerns purchase of X-ray equipment for security control of hand lagguage and the articles and goods subject to security control, metal detectors and electronic system of fence protection together with CCTV system.

When you browse our site, we would like to use cookies for three main purposes: correct display of our site, analysis of site traffic statistics, and social plug-ins. Click below to give your consent or go to Settings to make detailed choices about cookies.

Choose the settings that suit you. You can always return to them using the link provided in the privacy policy. There you will also find more detailed information about the cookies we use.

The necessary cookies are for the proper functioning of the website and for better security. Unfortunately you cannot turn them off because then our website will not work properly.

We use this tool to collect statistical data (based on an abbreviated IP address) about how visitors use our site, e.g., number of visitors, bookmarks visited, time spent on the site.

With this tool, Facebook collects information about the use of our website. This allows us to target you with personalised advertising within Facebook's advertising tools in the future. We, as the website owner, do not collect personally identifiable information.